5 of The Hottest Real Estate Markets in 2017 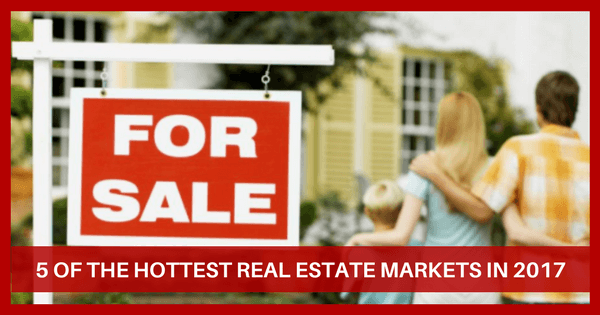 There has been a shortage of residential homes across the country, which has pushed the prices of real estate property upwards. According to Realtor.com, the median price of a residential home went above $250,000 last spring. Compared to the same time one year ago, the median home price has risen by 10 percent, which means that a residential house is retailing at $275,000. The prices do not seem to be easing mainly because the inventory levels are 11 percent lower than last years. Currently, only about 560,000 new homes have been listed. Below are 5 of the hottest real estate markets in 2017.

According to Zillow Home Value Index, the median cost of a home in Vallejo was $353,300. The cost of the homes has more than doubled over the past five years since 2012 when the price was about $150k. It is estimated that this price will go up by 5.7 percent over the next one year. The dramatic change has been surprising because the area was known for bankruptcy, misery, and crime. The city has benefited from Bay Areas brutally expensive housing costs as most buyers are currently priced out of San Francisco and are open to settling elsewhere. Buyers here are more interested in the lower listing prices than the crime statistics and poor public amenities.

San Francisco is one of the most beautiful places in the country. The landmarks, businesses, trendsetter residents and the sea make the city one of a kind. The median price is $1.194 million, a drop from last year, hence the increased interest. The home prices are being predicted to go up during the year.

The median value of a home in Boston, Massachusetts is a little over half a million dollars. The foreclosure rates in the city are 7.3 percent, which is much higher than the national percentage of 1.6 percent. The cost of housing has been on a steady rise in the city, and people who are buying know that their investments will be worth a lot more in a few years.

The median home cost in Idaho is at $213,000. In the past five years, the cost of a home has doubled from $134,000, with no sign of slowing. The property market in northern Idaho is warming up, and is expected to get better as the year comes to a close. The demand for property has gone up by 6.7 percent statewide compared to last year, according to Amherst Legacy.

The median price of a home in Kennewick is a little over a quarter of a million dollars, making it one of the most affordable places to buy a home in Washington. Foreclosure rates are at 2.2, higher than the national average.

Buyers are moving away from the conventional comfort zones and choosing to overlook factors such as perfect school districts, low crime rates and great social amenities. Instead, home buyers are focusing on areas where they can get a home at an affordable cost. A good realtor will help you strike a balance between the cost of the home and the livability of the place you choose to buy your home.

Our team at Nationwide has a combined 50 years of real estate experience. We have a passion for helping people get into homes, facilitating strong investments, and tackling new and interesting financing challenges.